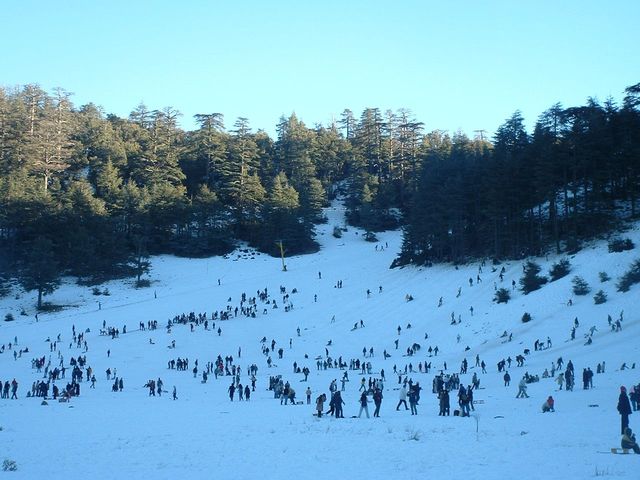 December 13, 2019By Nuria HuesoPosted in Culture

Yes, further south than the Pyrenees or Sierra Nevada, skiing possibilities also exist. Although Morocco tends to look like a hot and arid country, it is also the most mountainous in North Africa. This allows the temperatures at some points to be excessively low to below 0º and which makes the landscape white. But, not only the mountains are the places where it is skiing, the deserts are also the protagonists of this activity in winter. Therefore, if you are passionate about skiing and are thinking of going on a trip to Morocco, winter can be a good time to embark on your trip to the Maghreb country.

The main ski slopes are located in the High Atlas mountain range. If you wonder about the main destination this is Oukaimeden, the place of skiing and snow par excellence in the country. It is almost two hours from Marrakech, specifically located in the province of El Haouz, within the region of Marrakech-Safi. The town that names the ski resort is near the slopes. This is based, first of all, on the tourism that the area receives because it is attractive for winter sports lovers. The time of activity in which these tracks are open to the public is around four months until spring that lasts winter, when the snow is melting until March.

At 2,620 meters above sea level, its tracks in the ranking of the highest in the African continent. Your enjoyment is guaranteed. With chairlifts and routes for all audiences, from beginners to experts, Oukaimeden has no track that exceeds three kilometers, which makes them accessible to athletes. Although, the 300 hectares that compose it exceeding 20 kilometers between the tracks in which it is divided allows access of 4,000 people per hour.

If you are falling in love with the landscape without having gone, read on, because the best is still coming. The usual thing is to stay in nearby cities like Marrakech, which is just two hours from the Oukaimeden ski resort. However, around it there are also hotels and lodges that will make you stay in the winter fantasy with which you dreamed so much. It is recommended to book first on high demand. Other nearby places to stay are usually the villas of Asni, Ouigane or the Ourika Valley.

However, it is recommended to go in season not so frequented. The agglomerations of people in Oukaimeden can be to invoke in chaos, with long lines to climb the chairlifts, for example. Another of the ski resorts that stand out in Morocco is that of Michlifen. Located near Ifrane in the Middle Atlas, the “Moroccan Switzerland”, Michlifen was a crater and now its slopes are the slopes where skiing is practiced. In this season it is said that King Mohammed VI spends the winters sighting the snow due to the extraordinary beauty that this landscape gives off. To stay, Ifrane is ideal as it has hotels of different categories that will make the stay of any visitor the most comfortable.