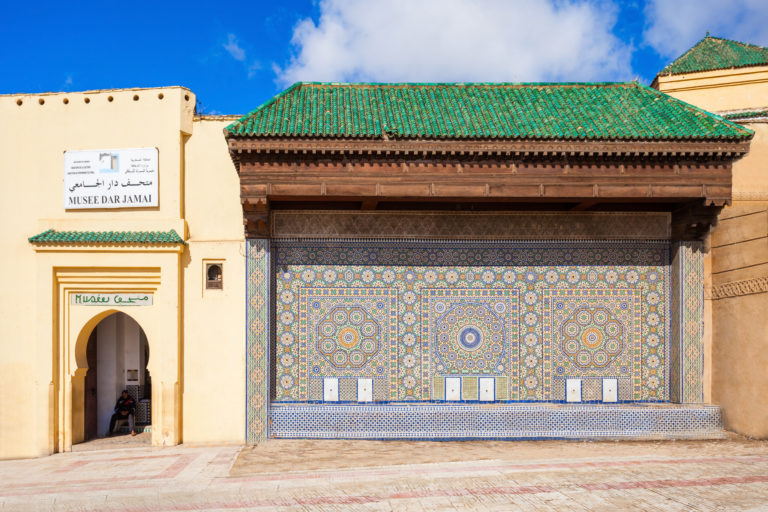 Dar Jamai, the glory of Meknes

Located in close proximity of the cultural centre of Meknes, the Dar Jamai is a starting point for discovering the city and its incredible Medina, declared a World Heritage Site by UNESCO. The Dar Jamai Palace is the living image of the past when the dwellings of the rich Moroccan families were full of luxury and sophistication, as can be seen in its Hispano-Moorish style.

A Journey through the centuries

Built next to the Al-Hédim Square, it is a large esplanade which gives access to the souks and is often frequented by the inhabitants and visitors to Meknes, with vendors, acrobats, narrators and minstrels during the night. The palace was built by the Jamai family in 1882. However, when Sultan Moulay Al Hassan I was defeated, the Jamai family also lost all their possessions, including the palace, which was passed on to the powerful Al Glaoui family.

In 1912 the French commandeered the palace for a military hospital. Since 1920 the palace has housed a fine museum of traditional ceramics, jewellery, textiles and cedar-wood craft dating from the 14th century. Furthermore, the palace houses a large number of artisan creations made of cedar wood, elements dating from the fourteenth century. The museum also has some antique carpets, representing various styles from different regions of Morocco, which reflects both the cultural richness and the valuable legacy of the Dar Jamai Museum.

The museum’s Andalusian garden is full of cypresses and different trees, where the painted windows, tiles and wooden details reveal the greatness that once this space had, so that the visitor can get an idea of ​​what the monument looked like in the 19th century.

The palace can be visited each day of the week, from from 10 a.m. to 5 p.m., with the exception of Tuesdays, when the building remains closed. The ticket price is 10 dirham.