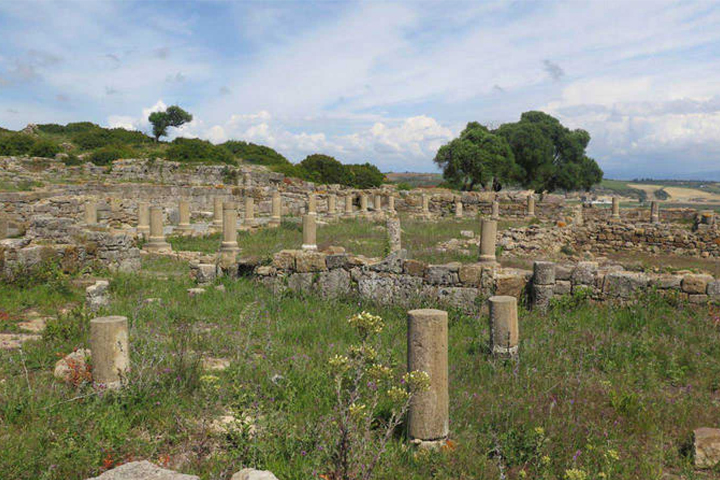 Lixus is an ancient city located to the north of the modern seaport of Larache, on the bank of the Loukkos river. It was founded by the Phoenicians in the 7th century BC and nowadays we can state that Lixus is a Phoenician city, since it is considered to be the first foundation in the far west of Africa. Larache is well known as a farming area of strawberry, which have turned the city into the Moroccan capital of red fruit. It is also important to mention that Morocco has become a main supplier of strawberries to the European food industry.

Some ancient Greek writers located at Lixus the mythological garden of the Hesperides, the keepers of the golden apples. The ruins are impressive and the walking tour lasts for approximately two hours.

The archaeological site of Lixus

In the excavations, the oldest remains date back to the 7th century BC. Lso, the remains of the antique port from the time when the Loukkos River was navigable were found. Next to it, there is an industrial area where the salting of fish, destined to the consumption on Roman tables, was prepared.

In the upper part of the town, we can enjoy magnificent views of the meanders of the Loukkos River, where the necropolis is located, with the remains of the temple. Nearby we will find an oratory and, in its surroundings, the thermal baths.

On the outskirts of the necropolis, there is a curious construction that is a theater for its hemicycle shape and an amphitheater due to the circular shape of its plaza. Not far from this construction, a Roman Mosaic, Ocean God, has been discovered.

Larache is a city located close to an estuary that merges into the Atlantic Ocean, with a medina at the heart of this area and an old fortress. This palace is an impressive and ancient building which was used to store weapons and as the house of justice, among its many functions. There we can find a wide collection of ancient coins, traditional fishing equipment, musical instruments, jewelery and statues.

The visitor will also have a chance to see a beautiful earring with the sign of Tanit, the goddess worshipped by the Carthaginians.

In the museum we can also learn about objects related to the glorious struggles for independence of the country. Do not forget to enjoy the view from above down onto the countryside from the castle palisades, it has long been known as an excellent place to view the Loukkos river.

No one doubts the good news that we have heard recently about the reopening of the ruins of Lixus.