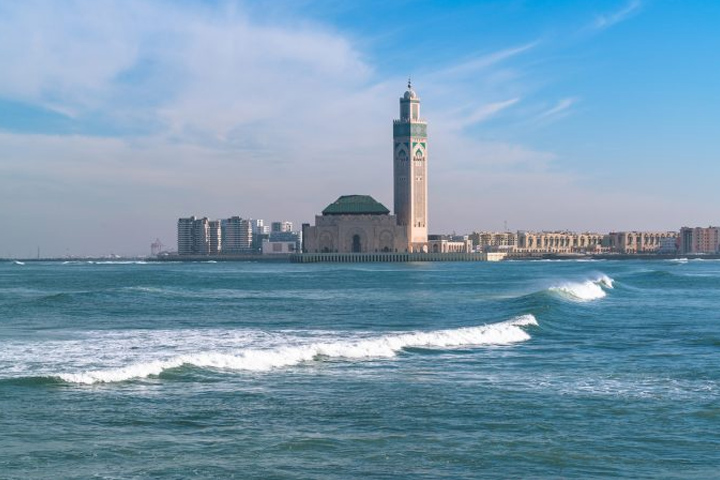 Reasons Casablanca Is a Must-Visit City

July 29, 2018By adminPosted in Destination

Casablanca, the economic heart of Morocco, lives a fast paced life. Lung of the Moroccan economy and guarantor of a unique historical heritage presents us its many faces where business and art rub shoulders and become blurred.

The richness of its architectural heritage evokes for itself the image of a city where time never stops. Steeped in history and looking to the future, the cosmopolitan city where all nationalities live together in peace and harmony.

1. History of Casablanca
2. Unmissable places to visit
3. Events and festivals
4. Activities in Casablanca

No historian could accurately identify the true founder of Casablanca, formerly named Anfa. Under the auspices of the Merinide dynasty, Anfa remained a small city open to maritime transactions with foreign countries. The Portuguese completely destroyed Anfa in 1468. Under the rule of the Alaouite dynasty and Sultan Sidi Mohamed Ben Abdellah, the city underwent a process of revival and became the White House.

During the Second World War, its port became a strategic place and welcomed many diplomats, this being a key point for business. This economic development is intensified by the port activity and attracts national and international investors, giving rise to the modern city that today is considered the economic capital of the Kingdom of Morocco.

The Sqala is a fortified bastion erected in the eighteenth century and was a defensive position in the city but is currently a cafeteria. Near the port and the Plaza de las Naciones is where the medina is located, that distinguishes from the rest of the Moroccan medinas by its atypical style, a mixture of Arab and Muslim Arab architecture.

The center of the city surprises with the legacy of the “crazy years”, the 20’s and 30’s, which were the theater of unique architectural expressions.

In the south-east side of the city, the neighborhood of the Habous is located, a charming neighborhood composed of narrow streets, small squares and stone arcades. It houses numerous bazaars and craft shops.

The building of the “Mahkama” hosted the sessions of the court as well as the receptions of Pachá. The decoration of its patios and rooms alludes to all the richness of Moroccan art and make reference to the ancient Andalusian palaces.

The Hassan II Mosque is the largest in the world after the Great Mosque of Mecca. This religious building has on the ground floor a rectangular prayer room with a perfect symmetry, supported by seventy-eight pillars of granite, marble and onyx. The tile roofs are of unforgettable emerald green colour. Beautifully decorated by craftsmen from all over Morocco, this building is worthy of admiration: frescoes and mosaics of geometric shapes, carved and painted wood, stuccoes with inextricable drawings… It opens its doors for non-Muslims and guided tours are organized every day except on Fridays and during prayer hours. 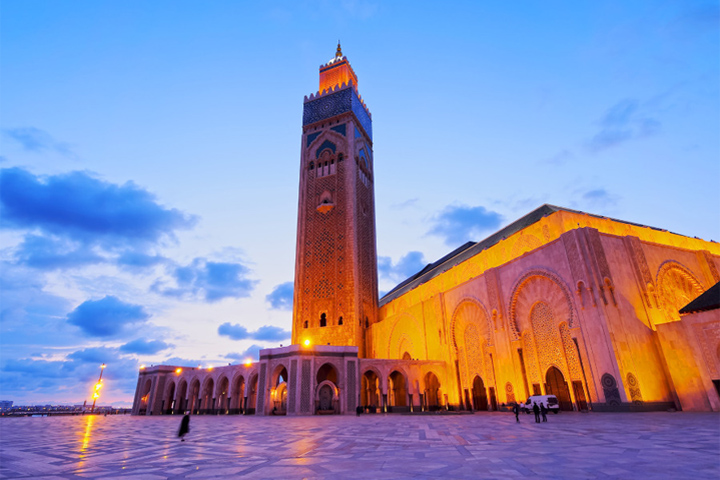 The Casablanca Festival: In July musical artists from all corners of the world offer an unusual spectacle to the public.

The Boulevard of Young Musicians: It is a festival of urban music that allows the new generation of musicians to reach a wider audience.

International Theater Festival: Representations that offer a meeting point for exchange and confrontation with creations from different countries.

The Casablanca International Marathon: More than 42 km that run through the city and that marathoners from all over the world take advantage of to get to know the city in a peculiar way. 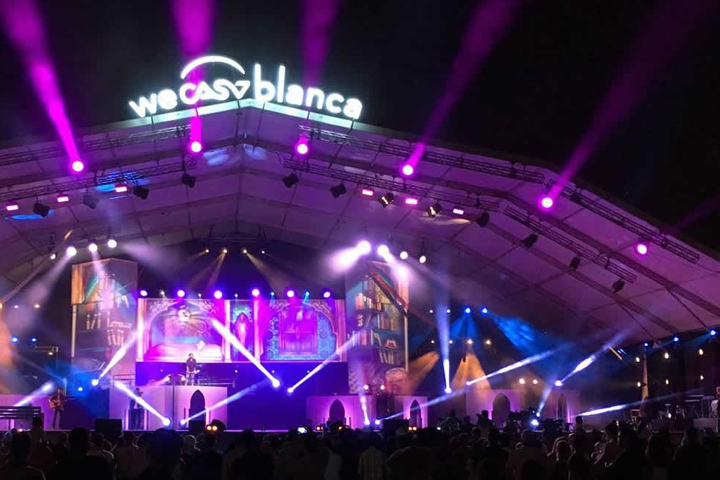 Amusement parks to have fun with your whole family. Visit the Aquaparc Tamaris, the largest water park in Morocco.

Golf for lovers of this sport, who will find a paradise at the Royal Golf of Anfa.

Spa and thalassotherapy for those seeking relaxation and well-being. The properties of seawater and algae provide benefits to body and mind in relaxation and beauty centers.

Shopping for all tastes. From the Moroccan craft tradition to the international luxury brands, Casablanca is a real attraction for shopping lovers.

The best international cuisine, very creative and sophisticated. Treasures for the palate that arise from the perfect blend of Mediterranean flavor with the exotic flavors of the Far East.

If you want to get the most out of your trip to Casablanca, enjoy some of our excursions.